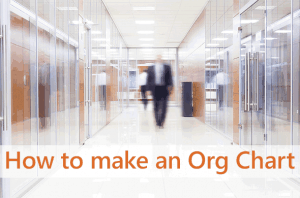 I had a call the other day from a friend of my daughter’s who had been asked to create an organization chart for her  department. She works in an engineering firm in the aerospace industry and has the kind of varied role that so many jobs seem to demand these days. However, on this occasion she had a problem.  The Org Chart had to be finished by the end of the week.

Now the department she works in isn’t huge – about 70 people work there as far as I can tell – but the prospect of creating individual shapes for each one was not one she was looking forward to. Added to that, the complexity of “who works for who” and the added problem of inserting and deleting shapes if the organization chart should need revising is what made her call me for help.

Ever since Office 2007 the SmartArt feature in Word and PowerPoint has included an organizational chart template that is easy to use. However, the size is only adequate for very small companies and editing the default shape alignment is something of an acquired skill. So although she had tried to use this approach, it was clearly not going to solve her problem within the timescale.

Which is why she called me… 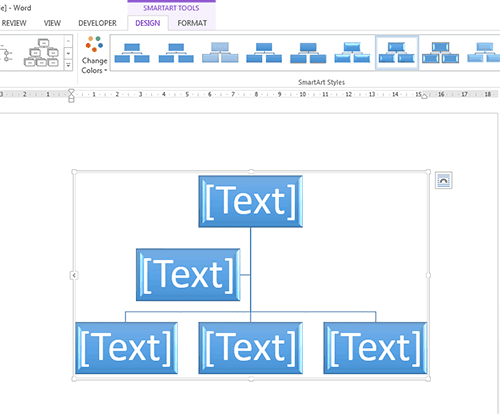 The OrgChart Template in Word

My first question was “do you have the employees and managers records saved in another format?” and the answer was “Yes”. So having established that the data already existed, my next question was “do you have a copy of Visio in the office?” She had to go away and check on this, but the following day she was able to confirm that they did have a few licences and the IT department had installed a copy for her.

Now we were in business!

Visio and the Org Chart Wizard

Visio has a fantastic Org Chart wizard that allows you to import data from a text file, a .csv file, an Excel workbook or a database file and use it as the basis of an organization chart. As long as the file contains certain information – the employee names and who they report to – the wizard will generate a perfectly aligned org chart in a matter of seconds.

Once the basic organization chart has been created it is easy to modify its appearance by applying a theme or formatting specific parts of the chart. As the organisation my daughter’s fried works in uses Visio 2010, I have used the same version for my tutorial video but the principle works just the same in Visio 2007 and 2013.

If you want to watch more tutorials like this one on creating an Org Chart in Microsoft Visio, head over to www.visio-tutorial.com