How to Create a Chart

harts, or other types of graphs, are excellent ways of expressing numerical data in a graphical manner. They are universally understood by anyone and allow everyone to appreciate the meaning of the data even if they have no prior knowledge of the subject. In short, creating a chart in Excel enables everybody to grasp the principles being communicated by the figures – as the old saying goes; a picture speaks a thousand words.

Microsoft Excel, from the earliest versions right up to the latest Excel 2010 and 2013 versions of the present day has always had an excellent range of charts available but the Excel 2010 range is the best yet. The quality and range of types of chart that can be inserted is incredible, and once it has been created the options for customizing it are virtually endless. The tools available from the contextual ribbon tabs allow the colours, type, axis labels, legend, title and layout to be edited in almost unlimited ways, making the chart you finally choose genuinely unique.

And, of course, there are many other ways of enhancement available as well including making the charts dynamic, hiding certain parts to create a waterfall or cascade and formatting certain data series in a different way from the rest for emphasis.

As in previous versions of Excel there are any number of ways to insert a chart within Excel 2010, but by far the easiest, and the one that always gets the “wow factor” during my training sessions, is described in this Excel Tutorial 2010. When you start Learning Excel 2010, you will probably use the Insert tab and choose one of the charts from there, much as you did in Excel 2007.

To start with you need a set of figures to base your Excel Chart on. Ideally, these figures will be arranged in such a way that the field names are placed in each of the columns, allowing the individual records representing one unique instance of each field to occupy one row each. The names of each field should be clearly marked in a header row placed above the data, and if not on the very first row, perhaps because a title, heading or logo is already there, it should be separated by a blank row so that Excel 2010 can identify where the data starts and ends.

Don’t forget to include labels in your Chart

Often the data in each record is also identified and named in the first column, and if this is the case these names should be present and clearly identified so that Excel has the best chance of getting it right when it creates the graph. I find it is sometimes easier to format these row and column headers in a specific way that makes them stand out, and the cell styles in Excel 2010 make this extremely easy to achieve. Simply select the titles and from the Home tab on the ribbon choose cell styles; from there it is a one-click action to apply any of the standard styles to the cells. Alternatively, selecting the cells and using Ctrl+B will embolden them and thereby identify them in a sufficiently different manner.

When you are ready the magic can begin

The next stage in this process (which is actually extremely quick despite this long-winded explanation) is to select the data you want to represent graphically. This would include the field names and any other significant labels – category names or series names, for example – but the one thing you don’t normally want in a chart is the totals. This is because the totals of a set of figures will naturally be much larger than the figures themselves (since they have been added together), and when this is plotted it will produce a spike that skews the results and does not give a true representation. For this reason I would suggest not including totals unless the type of graph you want specifically requires the totals to be included.

Once the data is selected it is as simple as pressing the F11 key: Excel 2010 will convert the data to a 2-D column chart and place it on its own page. It is often easier to create a chart in this way and then customise it instead of starting from scratch; Excel 2010 offers you the option to move it and place it as an object in another sheet – perhaps the worksheet that contains the data, for example – and via the three contextual ribbons, a host of further formatting, design and layout options. 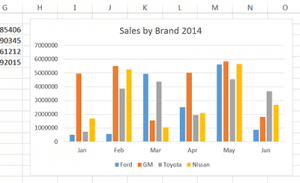 There are many examples of creating charts and customising them in the tutorials area of this website, so do investigate them if you would like to know more about creating charts in Excel 2010.

You can customize your Excel graphs and charts once they have been created, and all the tools for doing so are now included in the contextual ribbons that appear when the objects are selected. When you click on the chart three new ribbons appear; the design, layout and format tabs, each one representing a different set of tools, for example insert chart title in Excel.

These now take the place of the old dialogue boxes and chart wizard that used to be a feature of Excel 2003. They are a great deal easier to use and a lot more intuitive than before, so why not go and check them out?